I’ve spent the morning travelling back in time to my childhood in 1986 via the BBC Domesday Project!

This picture has me intrigued as it’s taken near my school and must be children within about a year of me at school – how quickly the memories fade, I can’t recognise any of them! 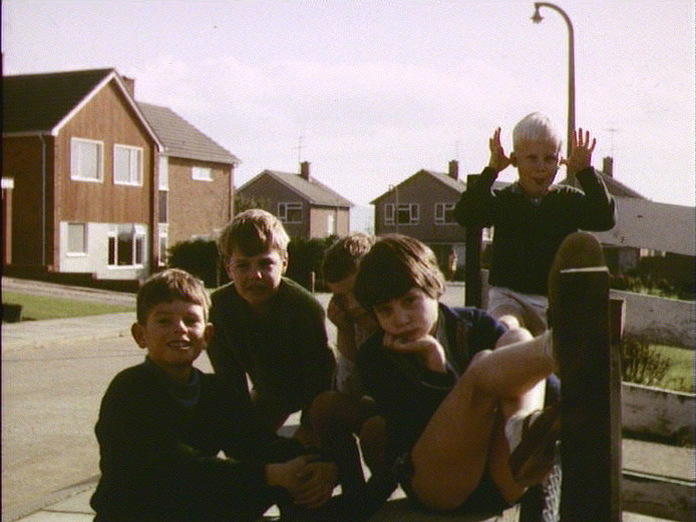 I should probably recognise these kids!

The Story of the Domesday Project

In 1986, 900 years after William the Conqueror’s original Domesday Book, the BBC published the Domesday Project. The project was probably the most ambitious attempt ever to capture the essence of life in the United Kingdom. Over a million people contributed to this digital snapshot of the country.

People were asked to record what they thought would be of interest in another 1000 years.

The whole of the UK – including the Channel Islands and Isle of Man – was divided into 23,000 4x3km areas called Domesday Squares or “D-Blocks”.

Schools and community groups surveyed over 108,000 square km of the UK and submitted more than 147,819 pages of text articles and 23,225 amateur photos, cataloguing what it was like to live, work and play in their community.

This was about documenting everyday life – the ordinary rather than the extraordinary.

The project used the cutting edge technology of the day, and the data was eventually presented on a special type of Laser-Disc, read by a BBC master computer and navigated using an innovative tracker-ball pointing system.

But the technology didn’t catch on and the computers became very expensive for schools and libraries to buy. Very few people ever got to see the fruits of all of their hard work.

As time went on there were fears that the discs would become unreadable, as computers capable of reading the format had become rare and drives capable of accessing the discs even rarer.

Now 25 years later in our age of the world wide web, digital photography, email and social networking, its time to have a look at those entries again, to bring the project up to date, and perhaps to lay down another layer of local history.

Here you can rediscover and explore images and articles from the original project to find out how life in Britain has changed… and how some things have stayed the same. In addition, you will be able to update the project by re-photographing the images today and updating text entries.

With the help of The National Archives this unique record will be preserved for future generations.

This is obviously a rich teaching resource for delving back 25 years into life near your school, and also a great chance to record for posterity life in 2011 in your little corner of the UK.

On a geeky level how interesting it is to see how this information had to be pretty much rescued from the laser discs it was stored on as the technology quickly became obsolete. In this age where everything is stored digitally it’ll be interesting to see if we hit similar problems in the future.

Edexcel admirably give you access to detailed question by question data from their Maths exams with the use of Results+.  However I have always found that it does not come in a format that is particularly useful for teachers or individual pupils. I have created a spreadsheet that analyses the data at a class and individual…

A ‘Technical Baccalaureate’?: The education charity Edge, which promotes technical and practical learning and of which Adonis is a trustee, is working closely with the Baker Dearing Educational Trust to come up with such a qualification. Under the plans, seen exclusively by Education Guardian, pupils aged 14 to 16 would spend 60% of their time…

9 Ways to Turn Around a Failing School  — Sir William Atkinson 2 min read I had the pleasure of seeing Sir William Atkinson close the GL-Assessment Conference on Friday. He’s an incredible character, responsible for turning around ‘the worst school in England’. He regaled that tale to us, reflecting on the 10 years it took to…

Katharine Birbalsingh, the former Head Teacher famously sacked following her outspoken speech at the Tory Party conference. Started with the story of challenging behaviour in Secondary Schools.  How have we got to this point, a dark age of education?  How can we move schools on into the 21st Century?  Need to equip children with a bag…

Sometimes a couple of ideas come together to form a little flash of inspiration. I’ve had a Pinterest account for a while but not really used it personally or thought of using it in education. A blog post from Mark Warner got me thinking though. Pinterest is a social site that encourages users to create…

Today is Pi Day! Enjoy: edit: Actually it would be yesterday wouldn’t it? 3.14 and all. Oops 🙂